“An ounce of prevention is worth a pound of cure”

Periodic paw inspections are a must to keep your pet in optimal physical condition. Not only does it ensure your pet’s good health, it strengthens the bond between you and your pet. Use this guide as a prelude to contacting a veterinarian for advice or the appropriate action necessary to sustain the health of your pet.

You may want to assemble a Pet Emergency Kit including the following items:

Use the pan to store all items and to use for bathing injured paws if necessary.

There’s no reason this exercise can’t be enjoyable for both you and your pet. Take a few minutes to get settled in a comfortable position. Hold your pet’s paw in your hand, then begin gently messaging with gentle pressure on each paw pad and surrounding areas. You pets love it when you talk to them, so verbally reassure and put your pet at ease using a soft, calm voice. Carefully look to see if any apparent or obvious issues are present. If your pet pulls back, whines, or yelps, a closer inspection is warranted.

TIP: When inspecting cat’s paws, it might be a good idea to wrap your kitty up in a blanket leaving its head and one paw exposed. This will limit kitty’s movements and keep its other claws safely out of action. 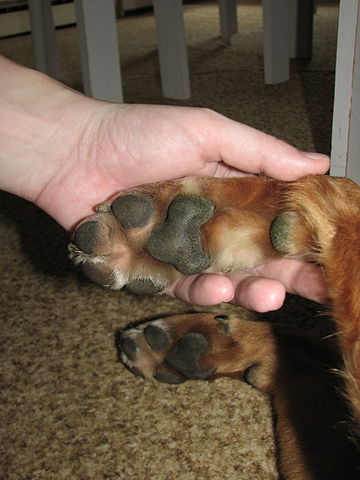 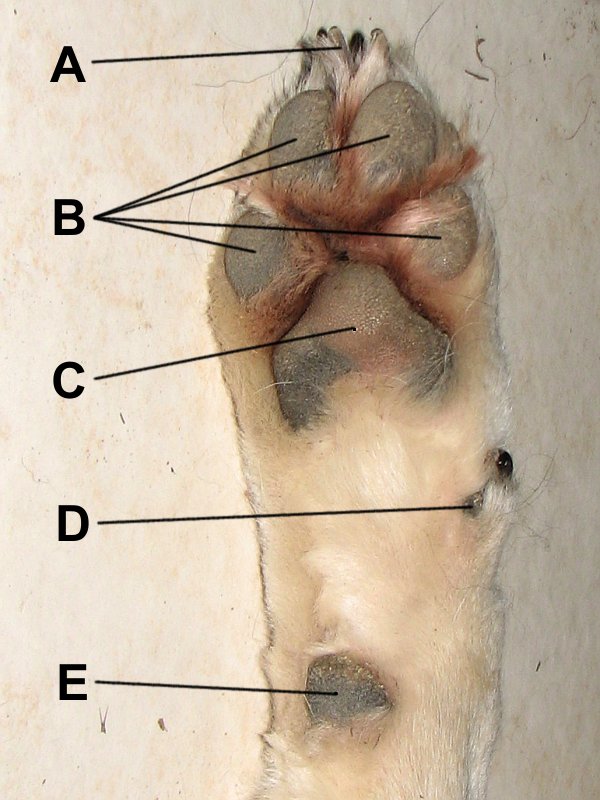 Factoid: Although they are both made of the same material, there are notable differences. Nails are flat and dull. Claws are curved and sharp. Claws are retractable while nails are always exposed.

Check for nail damage. Torn or bleeding nails pose a risk of infection. Clean the area with Betadine or a mild anti-bacterial soap solution, apply a suitable topical ointment, then bandage the wound. Bandages need to be changed daily until healing is complete, usually between seven and nine days although more serious wound can take longer. Your vet is the best source of guidance in that case.

Look for signs or trauma or swelling.

Did you notice your pet limping prior to your inspection? The sudden onset of a limp usually means some sort of trauma such as a cut, sprain, burn, etc.

Gradual onset of a limp is a bit more concerning as it can be attributable to a range of issues including hip dysplasia, osteoarthritis, ligament disease, dysplasia, or several other conditions only your veterinarian can properly diagnose and treat.

If you can’t see any obvious trauma, it could be an internal injury. A good diagnostic tool is your pet’s behavior. If the limp is the result of serious injury, your pet will likely move around as little as necessary. Be observant to see if mobility improves and if the limp persists for more than a day, a trip to the vet may be warranted.

When in doubt, take the safe route and pay a visit to your veterinarian. Proper early treatment can prevent much larger expenditures in the future should things getting out of hand. Paws are naturally exposed to dirt and bacteria. The risk of infection is high and necessitates prompt attention to paw injuries.

Check for splinters, cracks, or damaged nails. It could be simply bruised and requires some time and lite duty to heal. But if there are open wounds or scabbed over areas, these need immediate attention.

In an urban setting, as much broken glass as there is laying about, it’s amazing that our pet’s paws aren’t damaged more often than they are. It’s certainly not hard to pick up a shard or sliver of glass. The problem is being able to find where it’s embedded. Wood or thorns aren’t as hard to find but can still pose a problem if driven deep below the surface or the pad.

Before attempting to treat any wound, wear sterile gloves to prevent contamination of the wound area. At the very least, wash hands with anti-bacterial soap before and after treatment. 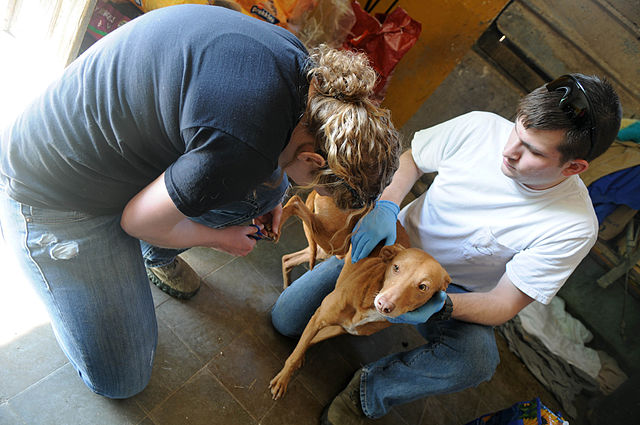 Regardless of the material, if the splinter is deeply embedded, your best option is going to be taking him/her to the vet. You and I know what it feels like to dig a splinter out and your pet will feel the same pain.

Cracks, tears, or cuts on the paw pad

First, determine the extent of the injury. If it’s a deep wound and bleeding persists more than fifteen minutes, a trip to the vet is in order. For minor cuts and scrapes, stop the bleeding by wrapping the paw in a towel and applying steady pressure for five minutes.

Note: If bleeding persists after fifteen minutes, take your pet to the vet as quickly and safely as possible.

Assuming bleeding is under control, flush the wound with cool water to remove any foreign material stuck in the wound or between toes. Use clean, preferably sterilized tweezers to remove the object. As a preventative measure, have someone help hold the animal to minimize movement due to sudden reactions.

If you can remove the foreign object, clean the wound again by washing with cool water and a mild solution of anti-bacterial soap if Betadine isn’t available. Wrap the affected area with gauze extending the gauze wrap above the ankle to prevent the bandage from easily slipping off. The more padding you provide on the bottom of the paw will ease the pain of walking on it until it heals. Bandages should be changed daily.

Should anything be embedded deep in the wound, don’t try to dig or probe deeper into the paw. It’s best to clean the wound as much as possible to prevent infection setting in, bandage the paw, and take your pet to the veterinarian ASAP.

Be careful not to wrap too tightly to avoid restricting blood circulation to the paw. The bandage should be loose enough to fit two fingers between the bandage and the dog’s leg. For clarification, fingers should be placed side by side and lying flat against the leg.

Factoid: Dew claws on both dogs and cats are thought by some to be vestigial digits. They are located above the paw pads on the inner surface of the leg. Cats use them to subdue prey while dogs use them for merely holding a bone steady while gnawing away. Some agility or stock dogs are said to use the dew claw as an aid to maneuver through tight turns and sudden change of direction. The debate continues. 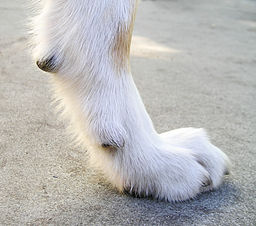 There are dozens of products over the counter products to treat minor injuries. Ask your vet which the best is to have on hand for emergencies. There are various home remedies reported to be effective but best regarding these is to consult your vet if there’s any question at all about the effectiveness of treatment. 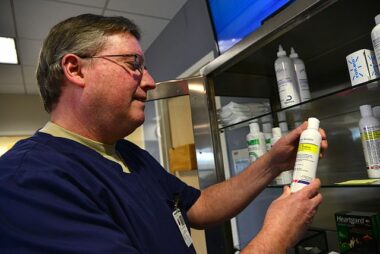 It’s worth mentioning that what works for one animal may not work for another. Dosages are dependent on weight, age, and often the breed of the animal.

While some over the counter (OTC) medications manufactured for humans are suitable for use on pets, there are a few that must be avoided.

When there’s any doubt about giving your pet a specific medication, call the Animal Poison Control Center @ 888-426-4435. Visit their website here: https://www.aspca.org/pet-care/animal-poison-control They are available 24/7

Your pet can suffer paw burns from other sources other than hot surfaces. During winter months, paw pads can be chemically burned from walking in caustic snowmelt created by the presence of chemicals used to melt ice and snow. Other sources can be chemical spills during yard or farm work.

Minor burns from hot surfaces can be treated much the same as a cut. Bathe the paw in cool water using Betadine or anti-bacterial soap. Bandage the paw and restrict the dog’s movements as much as possible until healing has a chance to occur. Severe burns require the prompt attention of a veterinarian due to the likelihood of infection.

Tip: If your pet chews at the bandage, apply an anti-chewing spray to discourage further chewing. 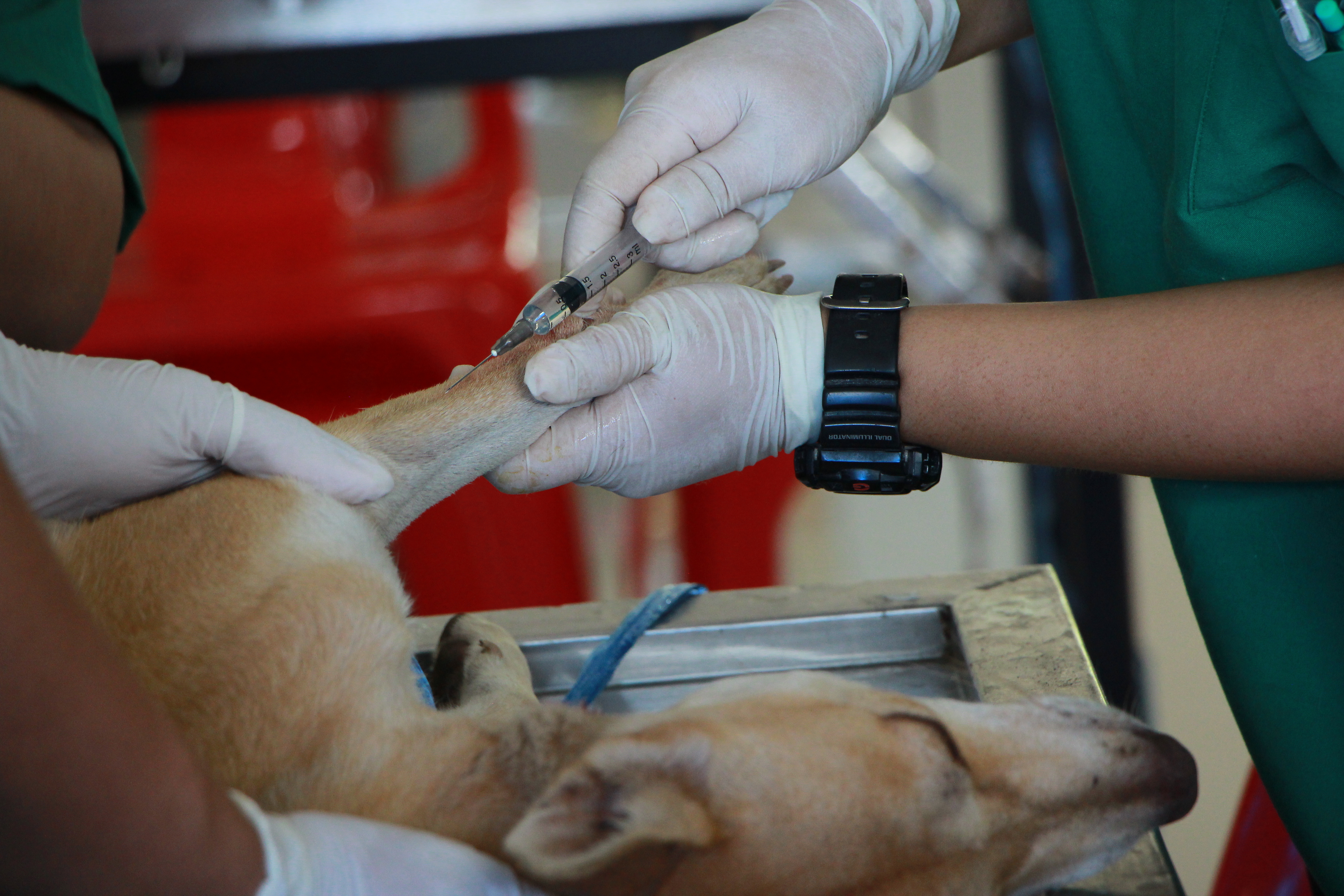 Understanding how to respond to paw injuries can save your pet much suffering and save you considerable expense. The most common-sense approach is to perform regular examinations and respond using proper measures. When there’s doubt, always contact a veterinarian for advice.